On 31st July 2016, Tim Hynd swapped marching down The Mall to cycling down it when he crossed the finish line at the end of the Prudential Ride London – Surrey 100 (part of the legacy from the London Olympics).

Tim chose to raise money for Maggie’s, a charity dedicated to offering the practical, emotional and social support needed by people with cancer. Initially the pledge was to raise £600 for Maggie’s but with fantastic support from family and friends, Tim eventually raised an impressive £1,460 for this fantastic cause. 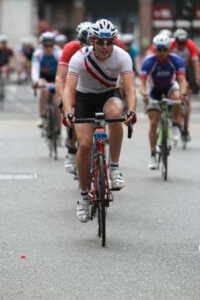 “It was a great experience and, thanks to all the preparation and training I’d managed to complete beforehand, not as gruelling as I first thought. Cycling out of London without the presence of cars on the road took a while to get used to but by the time we were out in Surrey, heading up Leith and Box Hills, I was taking full advantage of the space on both sides of the road. I’ve already entered the ballot for next year’s event!” 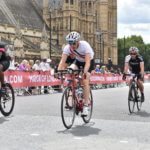 A busy run up towards the end of July at work, where Tim is a musician with the Central Band of the RAF saw him tour Cyprus for two weeks, where several of the band members hired bikes to complete some serious climbing training, followed by two weeks’ Changing the Guard at Buckingham Palace.

“The ride itself was quite enjoyable in the end. It was all the training I had to complete that I found hard work. In all, I racked up 2,000 miles and over 120 hours in the last six months but I’ve enjoyed most of it, especially when I’ve been joined by other cyclists from work. I used the two weeks of public duties before the event to do some reconnaissance for the ride and after Changing the Guard would cycle home after visiting a different part of the route.”

The band congratulates Tim on this venture. If you would like to donate towards this worthy cause, then Tim’s fundraising page is still live.