The band are pleased to announce that Matthew Stein will be the guest soloist at our Spring Festival this year. 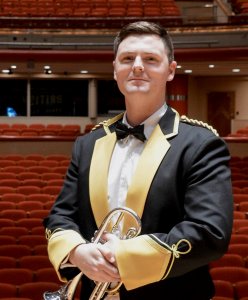 As a soloist, Matthew has performed with ensembles including, Royal New Zealand Navy Band, Salvation Army National Youth Band, and the National Secondary Schools Brass Band. He also spent four years as Principal Cornet of Wellington Brass Band, leading them to four consecutive national titles, one Australian national title, and an appearance at the British Open (2016). Prior to moving to London to commence study at the Guildhall School of Music and Drama, Matthew was a trumpet player in the Royal New Zealand Navy Band.

At Guildhall, Matthew studies with Paul Beniston and has performed as Principal Trumpet with the Guildhall Symphony Orchestra as well as winning the 2017 Armourers and Brasiers Brass Prize. He graduated in 2017 with a Masters of Music from Guildhall and is now a fellow of the school organising and conducting the Guildhall Brass Band.