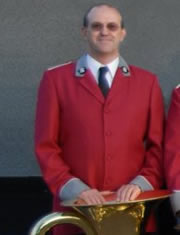 Garry originally joined the band in 1973 on Baritone before moving to Eb Bass in 1979. He left the band in 2005 but rejoined in 2009, initially on Bb Bass before returning to the Eb Bass section.

He has now moved away from the corps, soldiering at Cambridge Citadel, but continues his association as the bands Media Manager.

He is married to Susan and was YP Band Leader at Enfield for over 20 years. A number of his former band members now take their place in the senior band and others continuing their service in other Salvation Army corps in a variety of activities including two as Corps Officer’s.

Outside of band activities he is a keen Ipswich Town supporter.