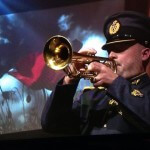 was at work as a musician in the RAF. On this occasion he was fulfilling one of his roles as a member of the Trumpet section in the RAF’s Big Band, The Squadronnaires.

This picture shows him taking part in that evening’s edition of BBC Radio 2’s Friday Night is Music Night. This was a live show, broadcast to commemorate the 75th Anniversary of the Battle of Britain from the legendary airfield, Biggin Hill.

More about that broadcast and other guests can be found on the BBC Website.