The band was sorry to learn that former Tottenham Citadel bandsman Eric Hulks was recently promoted to Glory.

Eric was part of the cornet section in the Tottenham Citadel Band tour to North America in 1964 and rejoined the band again in the early 1970s. 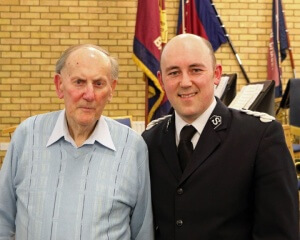 band met up with Eric when we visited Ipswich in March 2016. He is seen here with former Bandmaster Jonathan Corry.

We send our condolences to the family and assure them of our thoughts and prayers.