Enfield Citadel Band can today announce that its Bandmaster (Dr.) Jonathan Corry has relinquished leadership of the band in order to take up an appointment as Divisional Director for Music and Gospel Arts for the Chicago Metropolitan Division within The Salvation Army.

Conducting the band since September 2008 and being commissioned Bandmaster in 2009, Jonathan has provided the band with opportunities to tour in Europe, most recently returning to his homeland in Ireland and recording a total of 5 innovative CDs featuring a number of new works. The most notable being to provide a soundtrack to the 1909 silent movie ‘The Salvation Army Lass’ with music by Dorothy Gates.  This pace-setting 17 minute long work for brass band and piano was realised within the combined CD/DVD recording ‘Faith’, which was hailed as another ‘first’ for a Salvation Army band.

Our forthcoming Pre Contest Festival on 7 October, provides another example of the extended outreach that Jonathan has provided for the band by commissioning a new work from Tom Davoren.  The work, ‘Living Power’, has been written for the band and will be the first by Tom for a Salvation Army band, is dedicated to Jonathan and provides a further example of the legacy he has left the band.

The band will be led at Long Melford and the Pre Contest Festival by Bandmaster Iain Parkhouse from Croydon Citadel. We are grateful to Croydon Citadel for allowing Iain to help us in this way as we seek a new Bandmaster.  Iain will share rehearsal duties with Retired Bandmaster Don Jenkins to whom the band is equally indebted.

The band would like to place on record its thanks and appreciation for the hard work and leadership Jonathan has provided the band over the past 8 seasons. We wish God’s blessing on Jonathan, his wife Louisa and their son Jack as they move to the USA. 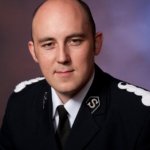 Jonathan Corry said, “It has been a thrill and a blessing to be Bandmaster of Enfield Citadel Band, a band which I have followed from a young age under the leadership of the inspirational Bandmaster James Williams MBE. The band has always been receptive to my new challenges, ideas, mission and performance opportunities as well as fervently continuing their weekly contribution to worship.  My heartfelt wish is that their unique ministry continues to excite, inspire and spiritually uplift all who hear them”.

Deputy Bandmaster Andrew Justice speaking on behalf of the band said, “We have been very fortunate to have had a leader with Jonathan’s musical and brass band credentials for the past 7 years. As a Salvation Army band we use the resources we are given, and the task is now to appoint someone who can live up to the achievements of Jonathan and his predecessors.  We wish Jonathan and his family all the best for their future”