The band opened their 2016/17 season  with a concert in the beautiful setting of Holy Trinity church, Long Melford, which had been prepared for their Harevest Festival celebrations. 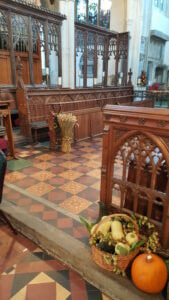 For those who were unable to attend,  a copy of the programme is available to download here.

The band were under the guest leadership of Bandmaster Iain Parkhouse  (Croydon Citadel) and were pleased to have Derick Kane due to the absence of our own principal Euphonium.

Derick was one of 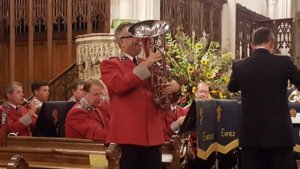 4 soloist’s featured on the programme were it was noted that our own principal Trombone, Andrew Justice, 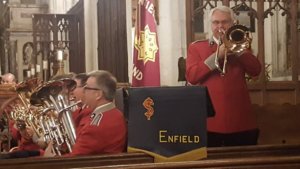 The band finally bade farewell to Bandmaster Jonathan Corry as he and his family move to Chicago later this week. The bandmaster joined the 2nd Cornet section 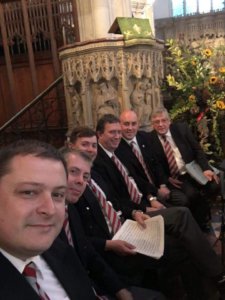 Bandmaster Iain Parkhouse, at the conclusion of the programme, recognised this and invited Jonathan to lead the band one final time in The Red Shield. Photos here have kindly supplied by Roger Herbert and Adrian Croucher.

The band were pleased to have our own CO’s Major’s Andrew and Alison Gaudion in support, both of whom led aspects of the programme.