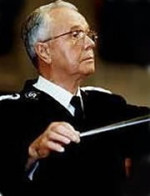 It is with deep sadness that the band announces that Bandmaster James Williams MBE passed away peacefully this afternoon. The funeral will be held in the afternoon of Wednesday 5 July and take place in Enfield SA Hall, Churchbury Lane, Enfield EN1 3HQ.

James Williams joined the cornet section of the band (then Tottenham Citadel) in 1944, whilst serving with the Band of Her Majesty’s Grenadier Guards. He set a remarkable record of consistency in his continuous service with the band as principal cornet, soloist, deputy bandmaster and bandmaster.

World renowned as a cornet soloist, James has also been a member of the SP&S Band, conducted by Eric Ball, the Rosehill Band and the International Staff Band. He has travelled extensively as soloist, conductor and lecturer and has instructed at Salvation Army summer schools in Europe, North America and Australasia. For many years, he was involved in concert band teaching and conducting for a North London Education Authority. 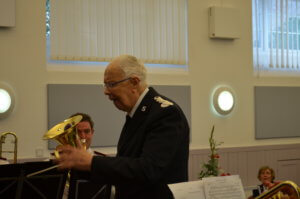 James has also adjudicated at a number of the UK’s most prestigious band contests, including the British Open, and in 1997 he received the coveted Iles Medal in recognition of his long years of service to banding.

Bandmaster Williams was appointed MBE in Her Majesty the Queen’s Golden Jubilee Birthday Honours list in June 2002 in recognition of his service to the brass band movement and The Salvation Army.