The band’s latest recording Classically Enfield is released this month. As the name suggests, this is a CD of arrangements of well-known excerpts from the classical repertoire and features soloists Christopher Deacon and Dudley Bright, Salvationists who are also active in the orchestral world.

We are pleased to welcome three new members to the band. Paul Baker was a member of the band in the late 80s and early 90s and has recently returned to the corps. Paul takes up the principal euphonium seat. Paul Williams is the son of our corps officers and has recently moved to Enfield following a time working for the Salvation Army in the USA. Chris Avison has moved to London to study at the Royal Academy of Music. Paul and Chris have joined the solo cornet section. Chris, Paul Baker and Paul Williams are pictured, from left to right.

Keith Loxley, Andrew Scott and Nick Marshallsay have left the band. Keith joined the band in 1982 and has been principal euphonium since 1986. Keith has moved to Harpenden. Andrew has been posted, with his work as an RAF musician, to Cranwell in Lincolnshire. Nick is now living in south London. We wish them well for the future. 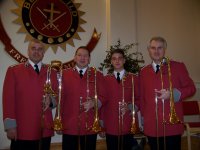 Enfield Citadel Band is delighted to be featuring Rath trombones as the preferred instrument of choice for their trombone section. According to Band Secretary and bass trombone player Stuart Horton, “Rath’s ability to adapt their range of options to meet almost any requirement from a group of players with different approaches to their playing has been a key part in our decision to use them. With over twenty years experience playing together as a section, we know what we want to achieve. When it came to changing our instruments, Rath’s professional response has helped us maintain the level of playing, both solo and ensemble, that our section has become known for within brass band circles.”

Tenor trombones used by the Enfield section are R4s, with the R9 bass trombone. Variations in slides, bell materials and finish, leadpipes, mouthpieces and cases have all been accommodated within the Rath system.

It is with great sadness that we report the promotion to glory of Mrs Elsie Williams, the wife of Retired Bandmaster James Williams MBE, after a long illness. Elsie was a great support to Bandmaster Williams throughout their 65 years of married life and particularly in his service with the band, the Salvation Army and the school music groups in which he was involved. She also took a caring interest in many of the younger members of the band, many of whom were away from home for the first time. The funeral service took place at the Salvation Army, Enfield on 31 March. Elsie is pictured, above, with Bandmaster Williams on the occasion of his receipt of the Salvation Army award for outstanding service.

We are pleased to announce that Jonathan Corry (pictured right with Retired Bandmaster James Williams MBE) has been commissioned as Bandmaster. Jonathan joined the band in September 2008 on moving to north London from his home city of Belfast to take up a teaching post with the London Borough of Brent. Jonathan studied trumpet at the Royal Northern College of Music followed by a post graduate degree in conducting. He has worked with many of the country’s leading bands as a player and conductor, including Black Dyke, Brighouse and Rastrick and Besses o’ th’ Barn, and has performed with the Ulster Orchestra. The band looks forward to the future with confidence under Jon’s capable leadership.

Selected Enfield Citadel Band recordings are now available to download from the World of Brass website. Joyous Brass, The Lord is King and American Anthology are available now. Other recordings will be added in the coming months. 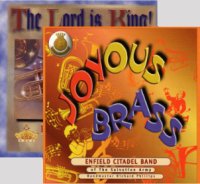