The Annual Pre-Contest Festival 2007 marked the retirement of Peter Moore, pictured left, the band’s longest serving member. Peter joined the band, then Tottenham, in 1959 and has been a valued member of the bass section since that date. Bandmaster Blyth paid tribute to Peter’s loyal and committed service and to his wife, Pat, who has supported Peter in his service through the years. In Peter’s inimitable style, he has retired from playing in the band but will continue to be involved by helping help out with the band library. We wish Peter a long and happy retirement.

We report with regret the passing of Peter Marley, a member of the band during the 1950s and 60s during which time he played solo horn and also served as deputy bandmaster.

The band has been pleased to have the help of two ‘old boys’ recently. Malcolm Hynd and Carl Shepherd (pictured right) have been filling in on 1st cornet and 2nd trombone respectively. Malcolm left the band in July 2006 following over 30 years’ service and Carl was a member of the band from 1980 to 1991. Both soldier at the Enfield Corps and both are proud to have sons in the band.

Scott Garman has left the band to take up the position of Regional Music Director with the Greater New York Division. We wish Scott and Loretta well for their new life in the USA.

Congratulations to Tim Hynd who has been accepted for training with the Royal Air Force Music Service. Tim will be away for a number of weeks while undertaking basic training but will be back with the band once this has been completed.

We are pleased to welcome Andy Scott (left) back into the band. Andy, who played with the band for a number of years in the mid-90s,

is also a member of the Central Band of the Royal Air Force. He takes up a seat on the euphonium section.

Congratulations to Simon Hicks (right) who has been accepted for training with the Corps of Army Music. We will miss Simon while he is undertaking basic training but hope to see him back with the band once this has been completed. We wish him well with his future career.

The band will make a week-long visit to the East coast of the USA in late October and early November 2007. The visit will include concerts in Washington DC and New York as well as a number of other cities en route. This will be the band’s third visit to the USA following earlier tours in 1964 and 1990 (pictured below playing in Disneyland, California). 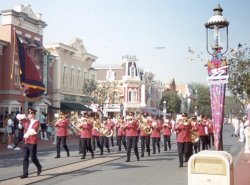 Derek Ivory has moved from 2nd Cornet to 1st Horn.