We are pleased to welcome Jonathan Byfield back into the bass section of the band. Jonathan Cooke has left the band due to travelling difficulties. 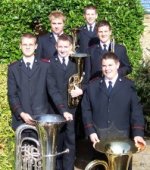 Six members of our young peoples’ band, Josh Byfield, Simon Hicks, Ben Horton, Alexander Price, James Shepherd and Adam Whitehead, have been commissioned as senior bandsmen and have taken their places in the band. See the Events Archive page for more information.

Malcolm Hynd, a valued and respected member of the band since 1975, has decided to stand down from the band due to a change in work circumstances. Malcolm has occupied solo cornet and more recently flugel horn seats with distinction both as a band player and soloist. His administrative skills – with which he served as Assistant Band Secretary and Band Secretary for a total of 15 years – his wealth of experience and dry sense of humour will also be missed.

Scott Garman has moved to flugel horn from the horn section.

Congratulations are due to Tim Hynd on his graduation as a Batchelor of Arts (Hons) in music from the University of Salford where he has been studying for the last three years under Professors David King and Peter Graham. Tim has taken up a seat on the Solo Cornet section now that he has moved back to the London area.

We have been pleased to welcome six older members of our Young People’s Band to recent rehearsals. Josh Byfield, Simon Hicks, Ben Horton, Alexander Price, James Shepherd and Adam Whitehead were all commissioned as senior soldiers during the spring and all have strong family connections with the band. Josh is the son of Songster Leader Jon Byfield, Simon is the grandson of Peter Moore, Ben, Alexander and Adam are the sons of Stuart Horton, André Price and Graham Whitehead respectively. James is the son of former member Carl Shepherd.

We are pleased to announce the re-release on CD of one of the band’s most popular records. Recorded in 1984 on the prestigious Chandos label, Kaleidoscope includes a number of Army classics such as Resurgam and Clear Skies performed by the band’s former principal cornet, Keith Hutchinson.

Congratulations to Scott Garman on his marriage to Loretta. The happy couple met while Scott was working as a Corps Youth Officer in Fulton, USA. We’re pleased to welcome Loretta to the Corps at Enfield as they commence married life together.

We are pleased to welcome Scott Garman back into the band following his return from The United States. He has taken up a seat on the horn section. Lloyd Hardwick has stepped down from the band following a change in work circumstances. We wish Lloyd well for the future.