Ralph Brill has joined the band as principal cornet. Ralph has transferred from Leighton Buzzard and is also a member of the Band of HM Welsh Guards. David Wilkinson has left the band after more than 20 years service on solo cornet. Nick Garman has also stepped down from the band. 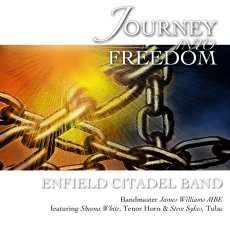 Congratulations to Tim Hynd who has gained a place at the University of Salford to study music under Professor David King. He will continue to play with the band when his studies allow. Scott Garman has left the band to take up the position of Corps Youth Secretary in Fulton, New York State.

Congratulations to Richard Hill on his marriage to Nicola. Andrew Hill Has stepped down from the band to devote more time to his work as Corps Youth Secretary.

Scott Garman has joined the band on solo cornet having joined his family at Enfield.

Maurice Patterson has relinquished the position of Band Secretary (Administration). Stuart Horton has taken over this role. Derek Ivory has been appointed Band Sergeant.