David Daws has transferred with his family to Hendon SA. David has served the band with distinction over a number of years as principal cornet and band sergeant and we wish him well for the future.

We are pleased to welcome Nick Marshallsay to the Bb bass section of the band. Graham Wallis has moved away from Enfield following his qualification as a solicitor.

Congratulations to Bandmaster James Williams who was awarded the MBE for services to the brass band movement and the Salvation Army in the Queen’s Golden Jubilee Birthday Honours list. 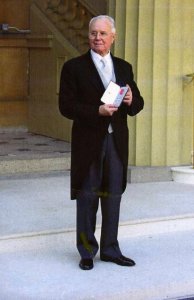 Brian Cuthbert has retired from the band after 28 years loyal service as principal percussionist.

We are pleased to welcome Andre Price and Jason Barlow into the band. Andre moved to Enfield from Wood Green several years ago and has now taken up a place in the band on second horn. Jason returns to the solo cornet section after a number of years at Chalk Farm.

Congratulations are due to Tim Hynd who has gained a place in the National Youth Brass Band of Great Britain.